Today, Supercell brings a new update in Clash of Clans, i.e. 1 Gem Army Boost. Let’s discuss it in deep that exactly what it is …

The very first boost, the 1 Gem Collector Boost, is completed along with the second phase of boosting just began – which I love even more. Boost your Barracks, Spell Factories & Heroes for 1 Gem. 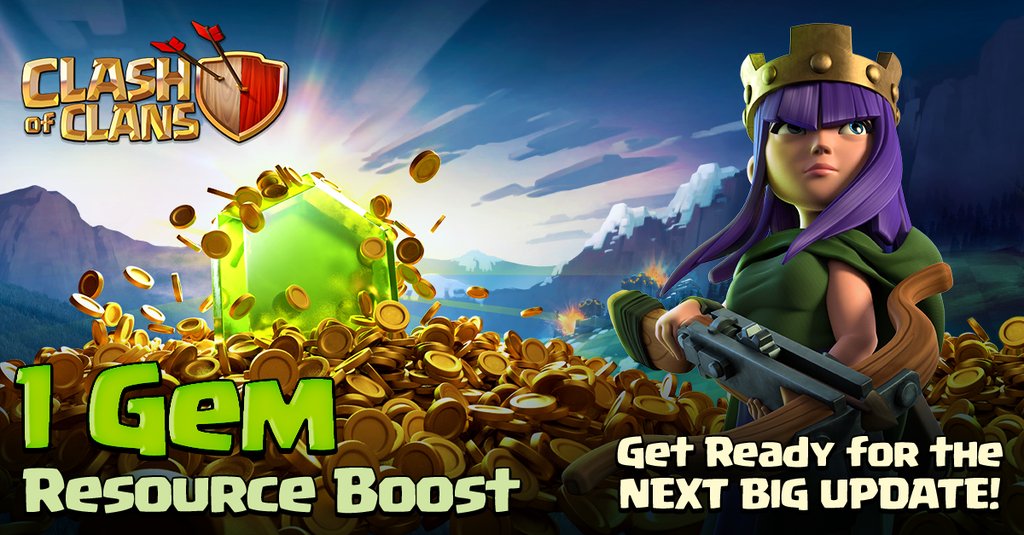 That’s virtually instant armies and raiding nonstop, so ensure that you get a calm place and raid such as never before!

If you want more about update you can read it that words by Supercell!

Balance is a continuous effort and we hope to bring another round of balancing changes with the December update. We are not considering the idea of bringing the Grand Warden to TH10 as we want to keep TH10 gameplay distinct from TH11 gameplay, and feel bringing the GW to TH10 would blur that line too much. Our balancing efforts seek to tackle this issue in other ways than through Heroes. If you remember our “Design Values” blog post a while ago, we mentioned that “Meaningful Progression” is one of our guiding values and every new Town Hall level should feel like a new chapter in Clash. The Grand Warden is a perfect example of this meaningful progression once you get to TH11. Back to TH10/TH11 balancing, here’s where our Playstyle Diversity and Depth values come into play. We realize that the War Community specifically is very vocal about their wish for more specific balance for TH10/TH11 (e.g. TH10 should be 3-starrable by other TH10, TH11 should be 3-starrable by other TH11) – but this is hard to balance with the normal multiplayer game, as the Leaderboards would lose its value if we make TH11 defenses too easy to star. We have to be careful about the changes we make to preserve Depth in TH11 multiplayer matchmaking – but in short, expect new balancing changes in the December update as usual. How is Supercell working towards balancing Clan Wars matchmaking? With every update there is the normal round of war matchmaking balance, and that will always shift things a bit. New troops/defenses/levels/stat changes get incorporated and weights are rebalanced according to troop usage and effectiveness. In the last update we rolled out a couple of adjustments so that “lopsided” bases/clans don’t have that much advantage as before, and the more extreme cases of lopsided clans will have a harder time finding a match, and will be matched with tougher opponents. We firmly believe in a good balance and will continue to monitor things and to roll out small (or bigger) adjustments to war matchmaking with every update.