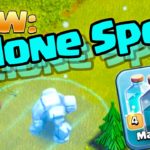 Clone Spell was first introduced in Clash of Clans in the end week of May 2016. The Clone Spell actually creates multiple copies of troops inside its radius. Just one troop is enough to produce replicates of itself for the housing space of the spell level. however, you can’t make a duplicate of heroes. It […]