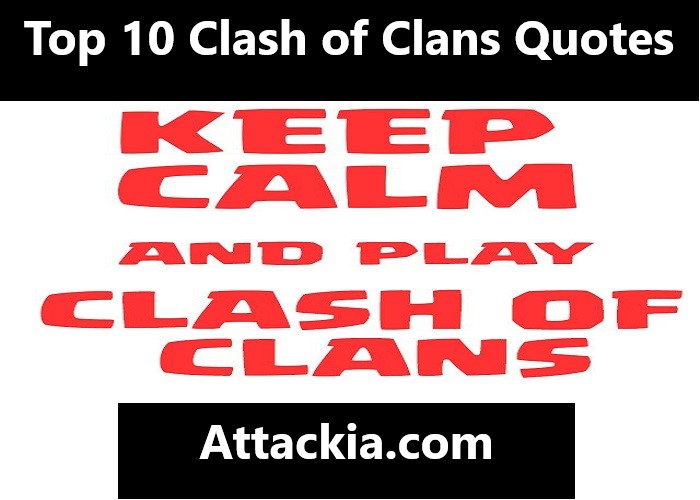 If you play Clash of Clans, you live in another world.

The world of Clash of Clans is definitely different from any gaming world whether it is offline or online. So the players say this quotes so that they can really mean. Yes, if you do play this great game, you are definitely in another amazing world.

Does not matter how small or weak your village is in Clash of Clans, you are always proud of it. Your village in this game feels just like your own home and that is why every player has a connection with this village on which he spent a lot of this time.

Waiting for things to build feels like an eternity.

Well, if you do have a lot of gems in the game and you cannot afford them as well, waiting for the buildings to upgrade manually is really difficult. It almost feels like an eternity when you are doing this.

Which makes finding a gem box a magical surprise each time.

The gems are the most important resource to have in Clash of Clans and if you get a lot of them by chance, you are in for a real treat.

You hate this screen because you never know if it’ll bring good or bad news.

Nobody likes to get attacked in the Clash of Clans because if the attacker is too powerful, you are probably going to lose your village and no feelings sucks more than that.

And feel helpless when you watch your village being attacked live.

So if someone powerful attacks your village, you know he is going to destroy. But sadly, there is nothing you can do and you are all helpless.

Even Liam Neeson knows the burning desire of revenge.

Liam Neeson’s Taken series is one of the best revenge stories and you can feel just like Liam feels in the movies when someone attacks your beautiful village and destroy it in just three minutes of attack. The fans of the movie can relate to this very well since Liam then brings the hell unto his enemies.

You try to subtly sneak in attacks when no one is looking.

Okay, so when your enemies are unaware of you, you can always giddy up, ready your armies, and then attack your enemies to destroy them while they wouldn’t even realize what just happened to them.

And carefully scout the enemy territory well before it’s time for war.

Well, it is quite obvious that you must have a good inspection of the enemy’s village before you go for an all-out attack because if the enemy is too powerful, do not even think of an attack.

When it’s time, you find it hard to explain why you need to do this battle immediately.

When the players in your clan give out a call for war, you don’t get to ask the questions and you have to go for it. Now, doesn’t matter how much this sucks, just make sure that you give your best in this war.