More than likely your base has been smack by LaLoon (better called as LavaLoon) attacks a lot lately. Air attacks are back and, as much I love this about the December 2016 Update, I have to agree that defending against it is very hard sometimes. About time to make an Anti LaLoon Base (at the least make it more difficult for them to crush my base).

In the very first portion of this guide I will explain to you how LaLoon attacks work and what makes them strong. This primary understanding will likely be helpful to find ways to defend against them.

How to defend against monstrous LaLoon/LavaLoon attacks?

Let me focus on the basics and show you how LaLoon attacks work in the quite simple mechanic. From understanding how the attacks really work, I can explain to you what they depend on and how to stop giving them a free raiding ticket on your base.

This attack has three parts:

The important part is that the Lava Hound not only offers heavy hitpoints that will keep your defenses busy, it will also spawn the cleaning forces when it dies.

So how can we put a spoke in their wheels (or better said, their wings)?

How to stop killing LaLoon attacks?

When you want to stop a particular attacking composition, it’s difficult to figure out what part of the attack is fragile enough to concentrate on.

In our case here, there are not really that options other than getting the Lava Hounds down as quick as possible and finding the Balloons down fast.

I know, not the biggest surprise, but there can be some things that we can use against them:

Here the all mechanism that we should concentrate on:

Always try to have your Air Defenses spread out around your base, although not too easily reachable from the outside. This will defend your base against a surgical Queen Walk or Hog Riders.

However, don’t place them too near the core. Otherwise, the troops will focus and go through your base fairly quickly.

My advice is to place them on the second line, so there’s always another building between the Air Defenses along with the outside ring.

Prevent making the major mistake by allowing Balloons destroy your Town Hall. Many people stop thinking about that Balloons deal splash damage and they can completely destroy a core like this:

If you keep this in your mind you will save your self from losing additional Stars many times.

Seeking Air Mines help a lot getting the Lava Hounds down quicker with their massive damage. It’s usually the right choice to have one of them directly close to an Air Defense.

This will make sure that the Lava Hound will go down faster, no matter which one they go on.

The fifth Seeking Air Mine is nice to set at the Air Defense which will be chosen most often to be attacked.

Here you can see the path of the Lava Hounds when it comes to the Air Defenses. These are not the good locations for Air Bombs, so make sure to place them on the outside.

It’s a bit hard at the beginning, but watch all replays of attacks against your base carefully and you will get some nice spots quickly.

Your X-Bows should be set to Ground & Air Mode! You need their DPS, specifically to clear out the Lava Pups from a longer distance. 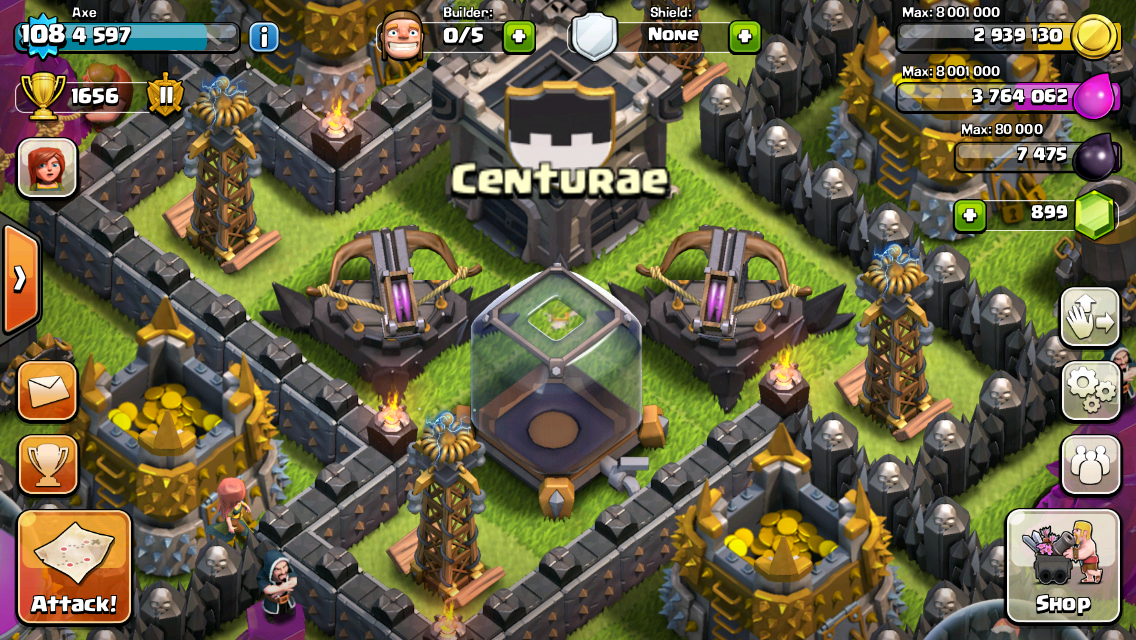 I for myself like Wizards most, because the Lava Hounds will activate the Clan Castle first as well as some maxed Wizards will deal serious damage on the Lava Hound without suffering damage themselves.

You may also try out a Baby Dragon with Wizards. The self-enraged Baby Dragon deals nice damage with a fast fire speed.

In my opinion Lavaloon be the most using and killing strategy in 2017. What you think?