The Clash of Clans Spring Traps pushes troops from battle when enemies step on it. It bounce off troops that holds around 15 housing space. For instance, it will bounce a group of 15 Archers, 3 Giants or any combination that occupies space up to 15 housing units like 2 Hog Riders 3 Barbarians and 2 Archers. Spring Traps are extremely effectual against several Giants or Mass Hog Riders. P.E.K.K.As, Golems and also Heroes are not able to be bounced by any level of Spring Traps simply because that grab more than 20 housing spaces. Further the Spring Traps only work on ground units. 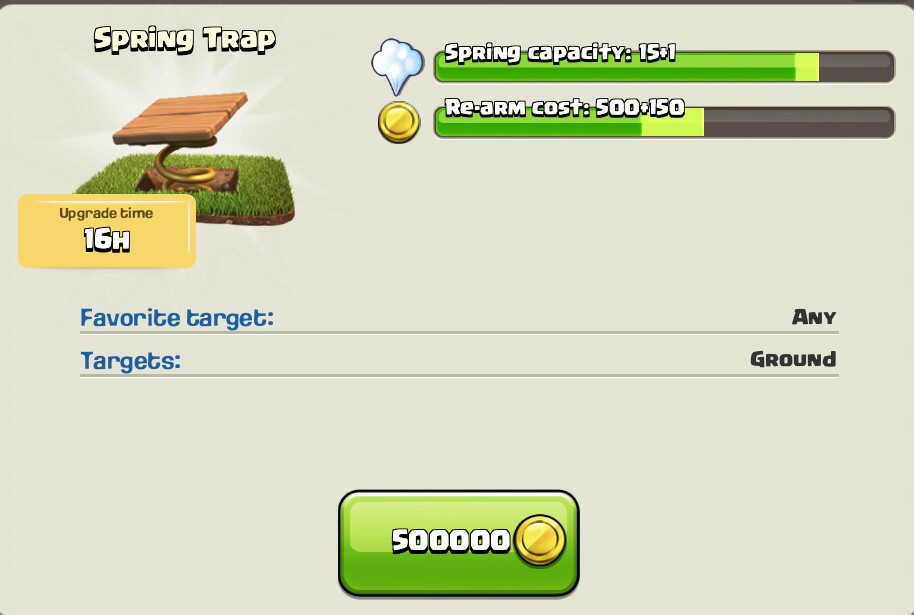 The Spring Trap generally does not strike the Goblin either because of their speedy movements, however, they are vulnerable to other traps. But if the Goblin stop once the Spring Trap has been triggered, it will be bounced just like a Barbarians or Archer, further, these traps are able to bounce back bunch of Goblins.

Traps, traps, traps. If you put it tactically (and masked to confound attackers) these bouncy springs, can destroy an attack, specially in the case of mass Troop attacks.

Important to put Spring Trap near the TH:

It is quite helpful to put them near or around the Town Hall, so you can get rid of large numbers of Troops.

An excellent strategy is to put a gap inside base  intentionally between the walls so that if attacker drop Troops over it they will be bounced back. As Troops will usually tend to undergo the gap instead of fight their way through the walls, they will be led right over the trap and be bounced to their end. Keep in mind, however, that Spring Traps are one-time-use and until becoming re-armed it will keep an undefended gap in the walls after an enemy has triggered it.

Put the Spring Traps between Defensive buildings, Core and Near by buildings:

A perfect phase of this strategy is to put the walls inside your base in order that the attacker Troops must step over the Spring Trap to damage nearby buildings. Moreover, You can put them in between Defensive Buildings to take out Giants and Hog Riders as they simply go through in a predictable path of one defensive structure to the next.

How to get rid of that Spring Traps?

Sometimes in Clan War Attacks, Spring Traps are found close to the Town Hall. If this is the case, deploying a few troops to activate these traps behind them your full troops to prevent minimal of loss of troops. In addition, there are some prominent gaps in between defense avoid deploying your troops directly into these gaps. Don’t use XMOD as Super Cell will simply put ban hammer on you. Another strategy to see Spring and other Traps is simply letting a lower weaker guy to attack first so that you can see in replay where were the Traps deployed.

Upgrading Spring Traps is Worth?

You should upgrade your Springy Traps to Level 2 we suggest and not spending too much of resources on them.